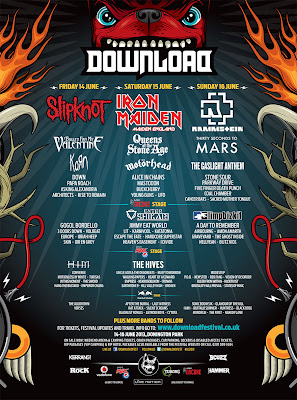 Bullet For My Valentine
Korn
Slipknot
Down
Asking Alexandria

For further ticket detail, please click in the link below

The first time I heard this song is on the TV  from John Lewis commercial adverts during the Christmas time period in 2010. Her voice is so catching because it's so pure and innocent, then I started to searched on the YouTube. Which I found that  "Your Song" is sung by a famous singer Elton John, he sang  "Your Song" first in 1970, this is one of his favorites song and he plays it at most of his concerts and in concert for Diana. This song has been covered by number of artists. Ellie Goulding's version is my Favorited which reached No.2 on the UK Singles Chart in Late 2010.


The lyrics express the romantic thoughts of an innocent. Hope you enjoy this lovely song !!

It's a little bit funny this feeling inside
I'm not one of those who can easily hide
I don't have much money but boy if I did
I'd buy a big house where we both could live
If I was a sculptor, but then again, no
Or a man who makes potions in a travelling show
I know it's not much but it's the best I can do
My gift is my song and this one's for you
And you can tell everybody this is your song
It may be quite simple but now that it's done
I hope you don't mind
I hope you don't mind that I put down in words
How wonderful life is while you're in the world
I sat on the roof and kicked off the moss
Well a few of the verses well they've got me quite cross
But the sun's been quite kind while I wrote this song
It's for people like you that keep it turned on
So excuse me forgetting but these things I do
You see I've forgotten if they're green or they're blue
Anyway the thing is what I really mean
Yours are the sweetest eyes I've ever seen
Posted by Ben Lee Group at 16:03 2 comments:

Anyband is promotional band formed by Samsung 's Anycall, which promoted their product "AnyBand"new cell phones. This musical group is released by South Korean in 2007, this band consists of Boa, Xiah Junsu (JYJ), Tablo (Epik High) and jazz pianist Jin Bora. This is the fourth Anycall music drama from Samsung, a series of music videos and commercials that promotes their cellphones with popular stars. The motto for this campaign is "Talk Play Love". While most people believe that technology will isolates people, Samsung opted to promote the concept that technology unites people.

This commercial was shot in Brazil, It's including Talk, Play, Love and Promise U two songs .The main theme is: This is the silent world, the law is for "No Talk, No Play, No Love", and the citizens are strictly controlled and monitored by their government. However, four individuals form a secret alliance to challenge the government's power. They keep in contact with each other through use of their Anycall cellphones, and "Talk, Play, Love" is their motto. They use music to encourage people to resist the dictator, and to fight for their own freedom. Music to save the world!

I will put no subtitle and english subtitle two different version on this post.

This English subtitle version is only I can found, the video is not very clear, sorry for this.

3. This is the advertising of Anycall, only have one minute.

Posted by Jiayi Zhang（Jessie） at 16:18 No comments:

Ever since Mike Portnoy left Dream Theater and Mike Mangini joined Dream Theater through a widely publicized audition, there has been an ongoing debate about who is the best drummer for Dream Theater.

Do we need to continue this discussion? I mean really, these two Mike(s) are a part of world renowned drummers whom which have their own style of playing and history. Both had their fair share of progressive, rock, and metal drumming which includes broken beats, odd counts and all that falls in between. But these two have their differences also.

Mike Portnoy is mostly self-taught while Mike Mangini learned it from school. Portnoy is a very powerful player while Mangini is very technical and precise. Both have played in a metal band, jazz band and pure progressive band. Both are session players whom have played with various virtuosos.

Coming to that, nowadays fans are still going about who is the best while in my opinion both should have their own place in Dream Theater history. Portnoy chose to leave and the band chose to continue without him and picked Mangini. Mike Portnoy have founded and put foundations to Dream Theater music and Mike Mangini have come to continue Portnoy’s legacy with his own mark.

Sure you wanna straightaway compare their drumming with the latest album, A Dramatic Turn Of Events, which is not fair. Why? Because Mangini have yet to put his own mark and signature to it. Petrucci composed all the drums for the album and Mangini only played it with his style. You wanna compare Mangini playing back catalogue? Not fair also because its Portnoy’s and Mangini constantly said that he is going to respect that.

If this debate going to continue, I would hope that people would wait for Dream Theater’s newest album where Mike Mangini wrote all the drums. For sure I won’t compare them because I like them both and I’m a Dream Theater fan whoever their drummer is.


Mike Mangini Under A Glass Moon

Mike Portnoy Under A Glass Moon

This song by Brad Paisley,who has had great following in modern country music due to his unique voice,choice of lyrics and his great style of playing the guitar was released in 2004 at a time when people had still not gotten over the disaster of the 9/11 attacks and a period of  love heartbreaks . This song depicts a soldier coming back home from war only to find out that his wife has been cheating on him whiles he was away with another bloke.
I guess this is a lesson we can all learn from.
Posted by Claude B. at 15:13 No comments:

Don't look back in anger is a song by English rock band Oasis, released in 1996 from second album (What's the story) Morning glory. The song was written by guitarist and main song writer, Noel Gallagher. It is one of the band's signature songs, and he was played every single live show after the dissolution of the Oasis band

There are two Noel Gallagher High Flying Bird concerts in the next month that will take place at Wembley Arena, and Royal albert Hall, London. For more ticket information, please check in the link below.

http://www.ticketmaster.co.uk/Noel-Gallagher-tickets/artist/776050
Posted by Unknown at 08:33 No comments:


Some few months ago, my friends and I watched Coldplay live tour in a movie theater in our town (yeah so this concert is recorded and broadcasted live throughout the world only for one day and only in theaters).


After the concert, I had a chat with my boyfriend about it and this thing came out where he didn’t watch it with his friends because he has no interest in Coldplay anymore.


Turns out that he’s still feel somewhat offended about the copyright infringement case between Coldplay and his favorite guitarist, Joe Satriani, where he sued Coldplay’s “Viva La Vida” to be copying his work “If I Could Fly” which was made and released in 2004.


At that time I wasn’t very curious and ignoring my boyfriend’s comments and feelings about Coldplay, but then I got curious.


Tried to find the difference and also googled it. For a really ill-informed discussion of this case, you can check out the comments on the Satriani YouTube post. For a more music-theory based discussion of their similarity, check out this excellent YouTube video from a guitar instructor in Canada.

Joe Satriani – If I Could Fly


Well,
What do you think?

news & updates about music. Glo is shortened from Global. Because music is for anyone from everywhere. We promote peace and togetherness through the varieties of music.